Jack is a criminal defense attorney, former CIA officer, journalist, and storyteller. He is unique across the entire state of Minnesota and the U.S. as the only criminal defense attorney who is also a former Central Intelligence Agency Officer as well as a former prosecuting attorney. He has a national reputation and can be seen frequently on MSNBC, Al Jazeera, CNN, and other networks across the country. He is also a member of the National Association of Criminal Defense Lawyers and the Minnesota Association of Criminal Defense Lawyers. He also hosts his own radio show.

So who do war memorials represent anyway? What are we supposed to think when we look at them? Or are they just about waving flags and pounding chests?

He was born in 1911 so that makes him one hundred and three years old. How is that even possible? More than double my age. What can he remember? Will he understand me? And it’s not as if he has led this quiet sedate life without trauma. Far from it. As I walk into the room to sit down with this man, he immediately sits up taller in his chair and stares me straight in the face with a look that seems to say; I know who I am and where I come from. 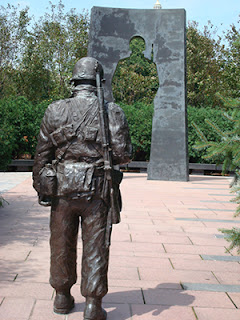 Staff Sergeant Walter Ortman served in the U.S. Army Air Corps from 1942 to 1946, and he surprises me. As I ask him about his life, I watch him change before my eyes. As he talks about his experiences during the war, I watch the years drop away until all I see is a young man sitting in from of me talking about something that happened a couple of weeks earlier instead of a series of memories dating back more than seventy years. He talks about being lucky and surprised. About how throughout the war, he never killed anybody, never shot a weapon at anybody nor even had to aim it at a human being. Instead, he and his men saved the lives of downed pilots and their crews by the thousands. I sit dumbfounded.

Sometimes, when we look at war memorials, we think of the men and women who served as icons, as heroes, almost as super humans. And yet, while some of their feats were extraordinary, we frequently forget that these were just normal men and women who frequently faced impossible circumstances and had to find it in themselves to do and be more. This may sound surprising but it strikes me as wrong to see people who have served as super-human because it makes their contributions seems inevitable – that's just what super humans do, right? But they were not and are not. Those who serve are our friends, our parents, our children, our neighbors. They are us. And that's who these memorials represent.

Email ThisBlogThis!Share to TwitterShare to FacebookShare to Pinterest
Labels: Veterans