Treatiesmatter.org allows people to explore the traveling exhibit, Why Treaties Matter, view more than forty related videos, and download Educator Guides for use in the classroom.

Want to visit the exhibit in person? View complete tour dates and exhibit locations at mnhum.org/treaties.

Christi Shortridge is the Communications Director for the Minnesota Humanities Center who has a passion for the Congressional appropriations process and blogging on One Chic Mom's Adventure on Suburbia. You can read her blog at: christiannasblog-2011.blogspot.com.

Recently, I had the opportunity to visit Washington, DC and share the work of the Minnesota Humanities Center with members of Congress and their staffs. Time spent on Capitol Hill always reminds me of why the humanities matter and how the humanities help us embrace our world. Capitol Hill in Washington, DC defines humanity. People gather here from all across the United States and around the world. People of differing political affiliations, the young and the old, those with different religions, races, and genders are all gathered on the Hill, feet pounding through those marble hallways. Why are they all convening on Capitol Hill? Everyone is trying to make the world a better place—each in their own way and with their own story.

On my single day on the Hill, I encountered groups for the Alzheimer's Association whose members donned purple sashes, an energized cable television group from Minnesota, uniformed flight attendants and pilots, and Western ranchers in 10-gallon hats and cowboy boots. Each person in each special interest group on Capitol Hill that day had their own compelling reason for being on the Hill and talking with their member of Congress. They all had a story to tell about what mattered most to them and their particular community.

As you stand on Capitol Hill and look west, the National Mall sprawls out in the distance, lined with museums and monuments—tributes and collections of American achievement. Each massive granite monument, each work of art in the National Gallery, and every artifact in the National Museum of the American Indian is a story of humanity and the humanities. Stories of where we have been and hope for embracing an even brighter future. A future where we all continue to tell stories of our passions and seek out what connects us rather than what divides us.

Posted by Minnesota Humanities Center at 9:00 AM 2 comments:

A poet and visual artist, Gwen Westerman is Professor in English and Director of the Humanities Program at Minnesota State University, Mankato.

The humanities have often been described as what makes us “human”—languages, music, the arts, philosophy, history, literature, religion. They foster creativity, critical thinking, communication, and collaboration. They teach us to cross boundaries and to make connections. The late Steve Jobs, co-founder of Apple, Inc., was a master at crossing boundaries. In 2011, he said, “technology alone is not enough—it’s technology married with liberal arts, married with the humanities, that yields us the results that make our heart sing.” And when our hearts sing, when we cross boundaries, both real and imagined, we can embrace what it means to be human. The humanities provide us with views of places we may never have considered going, of cultures and ideas both ancient and new, where we may find more similarities than we could have thought possible.

In October 2014, I went to Anchorage, Alaska, where I stood next to a mountain lake at the base of a glacier. I was stunned by the beautiful blue core of the ice. Even now, I am at a loss for words to describe what I saw and felt—what the 19th-century Romantic poets would call the “sublime” power of Nature. The high-resolution camera on my smart phone could not adequately capture the awe of that moment. The next day, I attended a conference session with Inupiat teachers from the North Slope of Alaska, an isolated area with limited roads. One of the teachers has a one-room school with 40 students in grades K-12, where she teaches all subjects including music, art, literature, and Inupiat language. The teachers spoke about connecting their students to their traditional language through digital technology. They told us they have 52 words for “snow.” The Inupiat language can also describe the complexities of sea water and glacier ice in ways that scientists are only beginning to understand.

While I learned a lot in those few days in Alaska, I realized that I would have only limited access to the vast knowledge held by the people who have lived there for millennia, who observe the patterns of the land and seasons, who describe their relationship to their homeland in multiple languages—Inupiat, Yupik, Gwich’in, Tlingit, Haida. Yet, we what we share is immense. In a world that seems increasingly fragmented and hyper-specialized, it is our disparate human knowledge that connects us, that helps us design new solutions when cultures work together side by side. Steve Jobs also pointed out, “The broader one’s understanding of the human experience, the better design we will have.” It is the humanities that teach us to embrace the similarities and the differences of our experiences, to reach across boundaries, and to make enduring connections. Now that the last patches of snow have melted near my home, I think about those Inupiat teachers sharing their beautiful, complex language with hand-held devices, their vast homeland, and the blueness of the glacier ice. My heart sings.
Posted by Minnesota Humanities Center at 9:00 AM No comments:

Mohammad Zafar - How do the Humanities teach us to embrace our world?

Mohammad Zafar is a 2013 recipient of the Veterans' Voices Award. He is a former U.S. Marine and a community psychologist who transformed his life and is now working hard to transform others.  Stay tuned as he embarks on a journey to open up first fitness complex in Minnesota that caters to holistic fitness with Veterans, disabilities, elders, cultures and families in mind.  You can follow Mohammad's amazing work at facebook.com/mohammadtransforminglives and communitypsychologist.org

If we strip down the word “humanities” in its simplest form, we will find that it describes and guides us to understand how human beings process and document the grounded human experience. It looks through our own personal lens of expression through art, history, language, philosophy, psychology, and culture. Then it helps us to feel, look, and listen to others in a positive light.

The humanities teach us that in order to embrace our own communities, we must be given the opportunity to freely explore and learn our own culture, faith, and people through a positive outlook in a healthy environment--away from negativity, bullying, and the toxic waste of forces that are internal and external. In other words, communities that have fresh resources, fairly distributed equity, opportunities, programs, and options will be able to develop the positive social identity of their communities in the context of the humanities.

The Minnesota Humanities Center has done an amazing job of being the leader by bringing out the positive social identity narratives of communities. I experienced this first hand when I was fortunate enough to be one of the 25 Veterans' Voices Award recipients in 2013. Being a Muslim and from an immigrant family, I am just one of many Veterans that contribute to our diversity pool—men and women from all walks of communities. This healthy diversity could be seen when one-by-one the 25 Veterans were asked to come to stage to receive our award while our bios were read. The Humanities Center gives Veterans a fresh opportunity to be recognized through reinforcing the positive social identity of Veterans and of the many communities we all come from. What they do for Veterans is a true example of being a humanitarian.

This justice that the humanities teach us can be naturally applied to understanding all communities, guiding us to embrace the similarities and differences of others, while respecting and appreciating our differences.

In essence, the humanities are there as a guiding light, enriching us as individuals and as a community. The humanities help us expand that positive experience with others. Imagine the humanities as a market place: we are the customers, all there to find things we know and like, but also there to try out new things that others have to offer.

Hello, my name is Mohammad Zafar, and I believe in you!

Posted by Minnesota Humanities Center at 8:30 AM No comments: 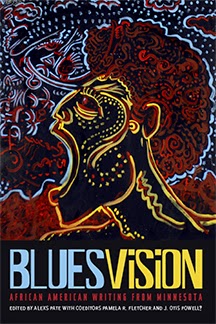 Blues Vision is a groundbreaking collection of incisive prose and powerful poetry by forty-three black writers from Minnesota who educate, inspire, and reveal the unabashed truth.

In celebration of April as National Poetry Month three poems from Blues Vision are featured this week. This anthology was co-published with the Minnesota Historical Society Press, which was made possible in part by the Arts and Cultural Heritage Fund through the vote of Minnesotans on November 4, 2004.

I know, Miles,
you didn’t have rural southern Minnesota
in mind when you
blew your classic mute
on your famous Birth of the Cool
sessions in New York, circa 1949.
But it’s the way the paper-thin
ice forms on the edge of the lake
in late October:
meeting at the cold dark water’s edge
---still open and free
though not for long---
with the ripples of these short choppy
muted notes of yours
blown just out of reach
this cool windy autumn morning.

I am carrying home in my breast pocket:
land where I learned to crawl,
dust that held my footprints,
long fields I trod through.

Home, where Mother baked bread,
where Papa spoke with skies,
where family voices gathered.
In my palm, this heap of earth
I have hauled over hills and valleys.

Releasing dirt between my fingers,
I ask the prairies to sustain me.
May my soil and this soil nurture each other,
may seeds root and develop beyond measure,
may the heartland and I blossom.