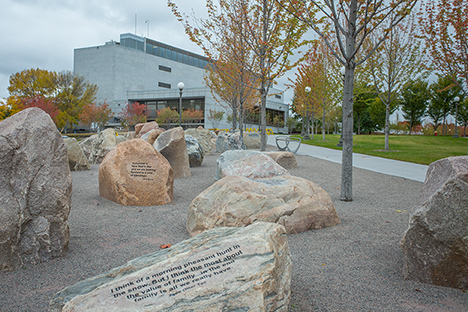 According to the Oxford English dictionary, a ‘war memorial’ is a “monument commemorating those killed in a war.” Memorials of all kinds have been erected in the U.S. to commemorate wars and those individuals who served throughout our country’s history, ranging from the nationally known Tomb of the Unknown Soldier and the Vietnam Veterans Memorial in Washington, DC, to single statues or plaques on display in town squares across the country. Like most states, Minnesota has its share of small-town memorials, but also boasts a large and varied display of memorials situated on our State Capitol Mall in St. Paul. Included among the many statues, art pieces, and plaques, is a World War II Memorial, a Korean War Memorial, and a Vietnam War Memorial, as well as a unique and moving Minnesota Military Family Tribute area, lending a voice to the non-military citizens who deal with fallout from war — the families of those who served or are serving. Part of that Family Tribute area features “Story Stones” — large rocks with etched statements taken from the letters of soldiers who were in service away from their homes and families , spanning a time period from the Civil War through to present day. Three very different examples of these Story Stones include the following:


There is no language that can describe, no pen, picture, or painting that can or ever will illustrate the scenes that transpired.
1862 – Waseca

Though oceans and islands may keep us apart, nothing can take you out of my heart.
1943 – Beltrami

If you have not spent time taking in the memorials on the State Capitol Mall, you should plan to go and see these monuments and statues and plaques up close. There is something about being in the presence of these often thoughtful and sometimes poignant remembrance pieces that helps make all of the history recounted by them more real, despite the bronze, and stone, and frozen-in-time faces. This is especially true of those memorials — like the Vietnam War Memorial and the Korean War Memorial — that list the names of those who served but did not return, giving you a very tangible look at the human cost of war.

Both adults interested in state and/or military history and students could benefit from some on-the-ground experience in this walkable memorial park, experiencing awe at the number and design of the memorials, and taking time to read inscriptions and the names of those who did not return from war. If you want to delve deeper into the differences between memorializing war and remembrance of the people and events involved, you should check out the “Reflections on War and Service” guide developed by the Minnesota Humanities Center in conjunction with the Minnesota Department of Veterans Affairs — available to download for free from our Absent Narratives Resource Collection. Although it was developed for use by educators, the guide is full of reflection questions and information useful to anyone visiting the memorials who might want to spend additional time contemplating deeper questions around war. Specifically, the guide is designed to help you think more clearly about the differences between how war is memorialized and how war is remembered by the individuals — the Veterans and their families — who experienced it.

For educators who are interested in gaining an even more in-depth view of the memorials and learning about presenting the information to different age groups, the Humanities Center is co-sponsoring (with the Minnesota History Center) the War and Remembrance Educator Workshop on August 3. The workshop will include learning from and with Veterans and a facilitated tour of the State Capitol war memorials. For more details and to register, visit www.mnhum.org/remembrance.

No matter how deeply you choose to explore the State Capitol memorials, we suspect you will come away from your visit with new perspectives on war and will feel more connected to the individuals who are remembered there.