Annamarie Gutsch - Much More Than Just an Exhibit: Why Treaties Matter Works

Annamarie Gutsch is best known for her work with the Minnesota Indian Affairs Council, having served as Executive Director from 2006-2015. She celebrates a long career in public service to the American Indian Tribes and communities and the people of Minnesota as a Government Relations Director for the Red Lake Nation. She has also worked for the Minnesota Department of Human Rights, for Veterans Affairs, and at the Office of the Revisor of Statutes. Annamarie serves on the Minnesota Humanities Center’s Board of Directors and was instrumental in creating the traveling exhibit Why Treaties Matter: Self-Government in the Dakota and Ojibwe Nation.

UPDATE: “Why Treaties Matter” is now on permanent display at the Minnesota State Capitol in St. Paul. For more information, visit: www.treatiesmatter.org.

Why Treaties Matter: Self-Government in the Dakota and Ojibwe Nation is a nationally recognized, award-winning, traveling exhibit made in partnership with the Minnesota Indian Affairs Council, the Minnesota Humanities Center, and the Smithsonian’s National Museum of the American Indian. This exhibit explores relationships between Dakota and Ojibwe Indian Nations and the U.S. government in this place we now call Minnesota, focusing on, how treaties affected the lands and lifeways of the indigenous peoples of this place, and why these binding agreements between nations still matter today.

Within our time to create, there always seemed to be an even more profound time to silently reflect and think – time to stretch our minds beyond why we were creating a project with ongoing deep reflection to envision exactly what we were trying to portray to our audience. What was our goal? We wanted to change Minnesota’s dismal understanding of our American Indian communities and create a hunger to learn more while perhaps creating new relationships in a way never accomplished before. With this goal in mind, the greatest collaboration I’ve ever participated in — the Why Treaties Matter exhibit — was born.

From start to the finish, the Why Treaties Matter collaboration and exhibit run, several members of the development team--consisting of me and a core group of outstanding Humanities Center program directors and administrators--spent endless hours of vision-building time together. Time spent sitting around a table, coffee or some beverage and snacks nearby, papers strewn about, where we pondered the simplest or the most complex ideas or thoughts, or, just ripped apart raw details in an agenda for an upcoming program. This was far more than just your everyday nine-to-five working group. It was a group on a mission; a mission that we often proclaimed was “to change the world.” This team of inspiring leaders seemed the perfect group of individuals whose eyes, when mixed together, could see far beyond what most people are capable of envisioning. And as we gathered, it became clear to me that this magnetic force drawing our visions together was truly one that would lead to great success. 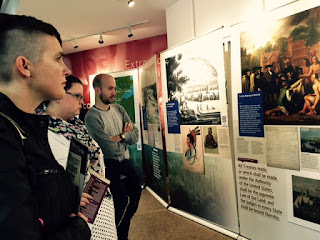 The Why Treaties Matter exhibit success wasn’t due to any one person’s academic or intellectual abilities or because we were equipped with greater administrative capacity or even money to turn out such a successful exhibit and programming. It was truly a recipe with healthy doses of eager world changers coming together to contribute their collective knowledge and stories. Most importantly, we were not necessarily the masters of the knowledge but more like the gatherers of it. The true master creators and voices of this project were the cultural leaders, elders, and community members who led this initiative. They came together with us, to sit around the table and helped create a tangible, truth-filled exhibit that has successfully moved towards changing how treaties and the history around them are viewed by both native and non-native people.

The Why Treaties Matter exhibit has touched over 67,200 lives since 2011. For an exhibit that existed well beyond its imagined time to tour various venues across Minnesota for six total years, that’s some spectacular record. What is even more profound is that out of the countless pairs of eyes and minds that gathered information from this rich visual and personal learning experience, most had likely never seen or heard any of this before. Although we knew this was the case, the responses were still overwhelming to us. Email after email proclaimed, “Why haven’t I heard this history before?” Think about that. The real history and story of the lives of our American Indian/indigenous people to this land and most people have never heard anything of it before. This is why we so steadfastly held to our claim that we would “change the world.” As we embark on the seventh year of this remarkable journey, I like to think in a small but profound way that we did.

To learn more about this exhibit, view this exhibit on line and, access accompanying educator guides visit treatiesmatter.org.