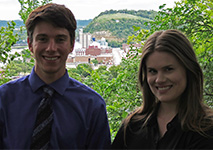 Casey Mathern is Curator of Objects and Exhibits at the Goodhue County Historical Society in Red Wing, Minnesota. She holds an MA in Decorative Arts, Design History, and Material Culture from the Bard Graduate Center in New York City.

James Clinton is the Education and Outreach Coordinator at the Goodhue County Historical Society in Red Wing, Minnesota. James holds a BA in History, with a local and environmental history focus, from Winona State University.

Strengthening connections between personal experiences and the physical environment has important consequences. Recent studies in the Journal of Environmental Psychology suggest a positive correlation exists between a sense of place and environmentally-conscious behavior. Public engagement with the humanities disciplines – especially public history – is key to making the connection between place and stewardship. A central component of the Water/Ways project is bringing together a humanities-centered understanding of water and water stewardship.


Story-gathering has been at the core of our We Are Water MN exhibit and program development. We had to do better than regurgitating the accepted, dominant narrative of Goodhue County’s rivers and streams. In fact, we recently mapped a walking tour that will interpret the Jordan Creek – now running underground – and trace its historical route through downtown Red Wing. The walking tour will be a feature of our local public program schedule when we host Water/Ways this fall.

Initially when we asked residents if they had a Jordan Creek story to share, we received puzzled looks. We discovered that appealing to people’s senses helped them articulate their connection to place. Their faces lit up with a smile as they named a precise location and offered us personal anecdotes; dairy farmers used the Jordan Creek in the basement of the farmer’s store to chill their milk cans, and you can only hear the creek during spring thaw if there has been heavy snowfall. When we entered Johnson Tire, a family-owned and operated business located directly over the Jordan Creek, we asked the owner if he had ever seen the Jordan Creek. We were quickly corrected: “You mean the Jordan River?” Until that moment, we hadn’t thought much about the distinction between a creek and a river – nor had we thought it particularly mattered. We were slightly taken aback. “Is that what you call it?” we replied. The owner’s response wasn’t rude, but matter-of-fact: “That’s what it is.” We listened to the store owner and knew to use the search term “Jordan River” in our archive, which yielded new results.

The Jordan absorbs individual stories and inspires a collective memory among residents that is concerned more with the ordinary quotidian than the rare, focused on the lived experiences of all rather than the exceptional few. In Red Wing, the Jordan anchors experience to the landscape and contributes to our community’s sense of place. We hope Water/Ways inspires individuals who take time to explore the exhibit and participate in some of the activities to realize their connection to place and advocate for the future of their local water.